SQL injection attacks, in which malicious SQL statements are inserted into an entry field for execution, are one of the most common attack vectors across the globe. SQL injections exploit security vulnerabilities in an application’s software and can be used to attack any type of SQL database.

In the past year, Check Point has created several adjusted SQL injection protections for our IPS software blade. By analyzing the traffic that triggered these protections in networks monitored by Check Point’s Managed Security Service, we can see the current trends and patterns in SQL injection attack attempts.

This attack vector forces the attacked server to host advertisements, according to reddit.com. The Check Point IPS protection “SQL Servers MySQL Vendor-specific SQL Injection” found HTTP requests in detected traffic that contained the string “where can you buy the abortion pill.” One report implied that this campaign is not new, and was already active as a spam campaign around July 2014 (per inman.com).

This is the entire resource:

Both of these protections were triggered by connections that contained the same HTTP request as displayed below:

These protections were triggered one after another and from the same source IP addresses. This is not the only occurrence of more than one protection detecting attempts to exploit SQL vulnerabilities. Analysis of several attack attempts detected in the monitored networks shows that the attacker tries to exploit several SQL vulnerabilities at a time.

These are some of the protections that were triggered together at least 4 at a time:

Havij tool detection by more than one SQL injection Protections

In a few attacks detected by the protection “SQL Servers UNION Query-based SQL Injection”, there was a repeated hexadecimal text in the HTTP requests: ‘31303235343830303536’ (the decoded string is 1025480056). This string is identified as related to the Havij SQL injection tool (stackexchange.com, isc.sans.edu). Additionally, this protection was triggered at the same time that traffic using the Havij automated SQL injection tool was detected. The Havij tool is widely used in the course of SQL injection attacks. Therefore, any detection of its activity is another step in the awareness and handling of a SQL injection attack.

The following is an analysis of known attack methods used in the latest attack attempts:

In example No. 1, although it’s very easy to see that this vector contains a complex SQL query attempt, the most suspicious method is a request for the “information_schema.”

“INFORMATION_SCHEMA” is the information database, the place that stores information about all the other databases that the MySQL server maintains. In addition, the attacker tries to access the COLUMNS table, which provides information about columns in tables. Therefore, this query also attempts to manipulate information found in the database even without guessing the table names.

In examples No. 2 and No. 3, we find various suspicious patterns:

“Always True” Vector – a certain pattern \ vector which takes advantage of SQL language, used to get a lot of information from part of the database.

In Example No. 4, there are a few common SQL injection characteristics:

One of the commonly used SQL commands is “Union.” For the command “Union All Select 1,2,3,4…” to work properly, the SQL UNION operator has the following requirements:

The attacker may obfuscate, or hide, his use of a tool for automated SQL injection or vulnerability scans. Example No. 6 (above) displays the hex vector as “OpenVas-SQL-Injection-Test” in ASCII .This obfuscation is intended to hide the activity of Openvas, a known vulnerability scanner.

Time delays are a very powerful technique as the Web server can hide errors or data, but cannot avoid waiting for the database to return a result. You can therefore confirm the existence of SQL injection.

One element that has a considerable impact on the ability to exploit an SQL Injection vulnerability is whether stacked queries are allowed. Example No. 8 presents this attack vector.

SQL Injection logs ratio from one monitored network in the past 60 days (over 8000 events):

Identification of the attacking sources in the TP events

Distribution by country of the attacking sources in the TP events 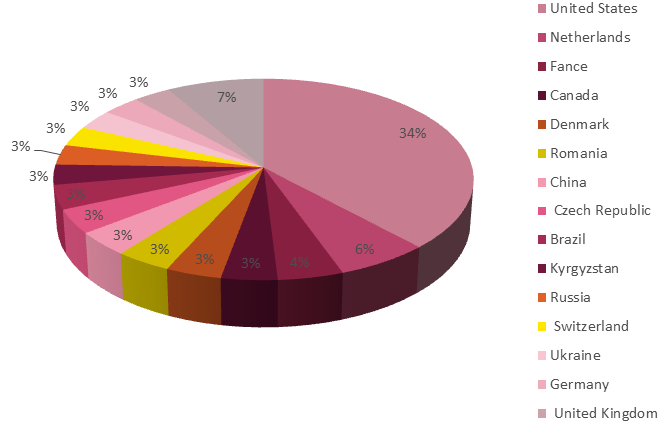