On June 4th 2015, Check Point discovered multiple instances of a sophisticated mobile malware campaign. The malware was previously inaccurately categorized as part of simple Adware campaign rather than the relatively advanced threat it actually is. Subsequent research by our mobile security specialists has found that the campaign consists of a set of malicious applications that are being automatically installed on Android devices after being physically connected to PCs that are infected with a version of the back-up application, SnapPea. 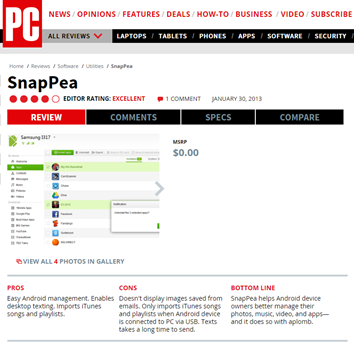 The attack, which was discovered by Check Point Mobile Threat Emulation, employs an extra-ordinarily large (12) number of exploits in order to gain root access to an Android device. This is the first time we have seen this many exploits being used in conjunction as part of one attack. It seems the developer has collected the exploits from several known exploit kits and employs them one after the other until one succeeds. Once an exploit runs successfully, the attacker can obtain root access which essentially gives them full control of the device.

This goes completely undetected by MDMs and enables the attacker to bypass any traditional security mechanisms. It’s worth noting that despite each exploit being part of a known Root-Kit, this unique form of implementation means that only an advanced sandboxing solution could have identified the threat.

What does the Malware do?

Once installed on an Android device, the malware attempts to contact its C&C servers and relay various forms of user and device data. It seems that the malware can collect data about the user, device parameters and cell network information.

The malware installs a differing number of applications without the user’s consent. The installed applications are currently used for Adware while clearly the activity can be changed to serve a much more malicious payload.

The malware has several evasion techniques ranging from the ability to hide its main code logic in system code folders to reinstalling itself after a removal attempt.

How can a Device be Infected?

This is a relatively complex Android attack that is infecting devices via a malicious version of a Windows backup application named SnapPea.

What is the infection flow? 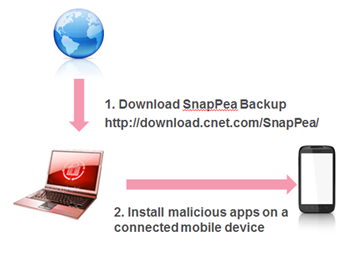 It seems that the malware is only installed if the flow happens exactly as described above. If a user manually installs SnapPea from the Google Play Store, no malware is installed. 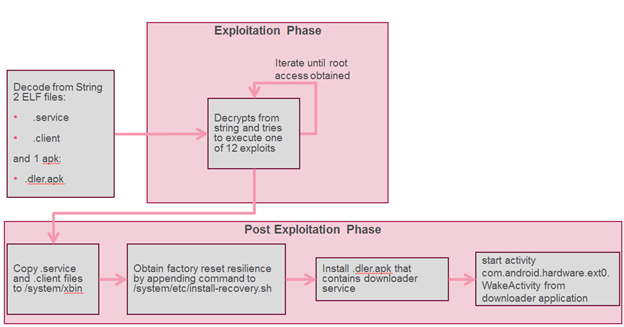 CVEs
While the malware is utilizes 12 different exploits only 2 of them have official CVEs: