The malware was distributed via the Transmission BitTorrent installer version 2.90 for OSX. The application was signed with a different code signature than the one previously in use.

When the application is launched, the executable is copied to a file named .kernel_service in the user Library folder.

OSX file and folder names which begin with a dot are hidden. This allows the executable to run on the machine for three days, during which time additional files, named .kernel_pid and .kernel_time, are created in the user Library folder.

The malware waits three days before beginning to encrypt files. During that time, it notifies its C&C server every 40 minutes that it is alive. In response, it receives a message encoded with base64 which contains an encryption key, and a text file called ‘README_FOR_DECRYPT.txt’ which contains the payment instructions. The attackers offer to decrypt one file ‘for free’ to make sure the decryption process works. 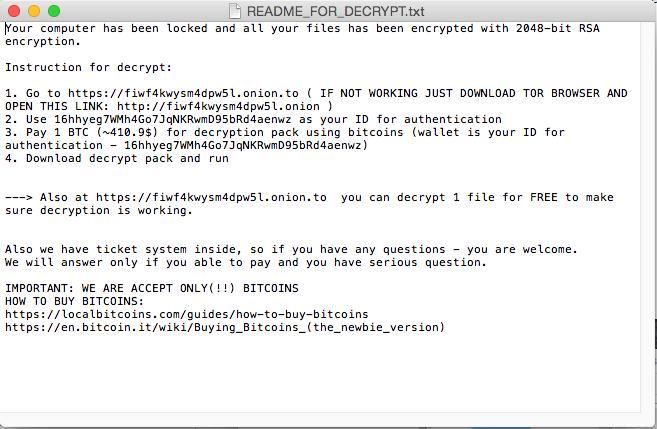 The C&C connection is based on websites used as proxy servers to the TOR network (onion.link, onion.nu). The domains are hard-coded identically for all infected machines.

As of March 8, the C&C server is still active. 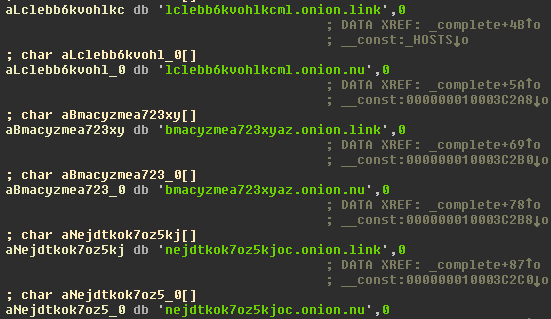 The hardcoded C&C domains used by the ransomware

Note – The malware is not persistent. Therefore, if the victim restarts the computer, the kernel_service process only runs if the infected Transmission file is opened again.

Although not unique, this is a concerning capability of the malware as external drives usually contain the backups to the files stored on the computer.

Apple added a signature detecting the malware to its XProtect anti-malware and revoked the developer certificate used to sign the malicious copy of Transmission.

There should be no new infections unless the attackers release an updated variant of the malware.

However, users who downloaded the infected installers between 11:00am PST March 4 and 7:00pm PST March 5 can still run the executable file and the Mac will not prevent that as the file was already successfully opened on the machine. Therefore, users are suggested to take the following steps –