Malware are spread by various methods such as phishing emails, malicious URLs, and more. One of the most prominent methods is using exploit kits, such as the infamous Angler Exploit Kit (EK), to spread malware to users when they visit infected sites. To cast as wide a net as possible, malware writers try to infect popular sites, which are usually well protected.

A method called malvertising may provide attackers with a workaround to enable them to breach a site’s protections.  The attackers infect the servers which serve advertisements to popular sites, thereby compromising all the site visitors. The Check Point Research Team recently exposed such a campaign involving Revive Adservers. Revive Adservers  were previously used  to redirect users to Angler EK in order to distribute the Bunitu malware.

This time, Revive Adservers were infected by actors redirecting to Angler EK to distribute TeslaCrypt ransomware, as part of the rising trend of ransomware attacks. The following is an analysis of one of the many samples we came across that is especially interesting.

We encountered a compromised webhosting company, which serves Angler EK redirections via its ad server on customers’ websites.

The webhosting company also serves Angler directly as shown below:

The payload in this flow is TeslaCrypt ransomware.

i22t5.t44sou90.pw  – The landing page content always begins with quotes from Sense and Sensibility by Jane Austen. The client is then analyzed for weaknesses before an exploit attempt is made.

Angler’s operators weren’t satisfied with just compromising the webhosting company’s home page, and proceeded to turn the company’s ad server against its clients.

The affected version of Revive Adserver was old and unpatched, with many CVEs disclosed since its release. Attacking it was an easy first step in the infection chain. 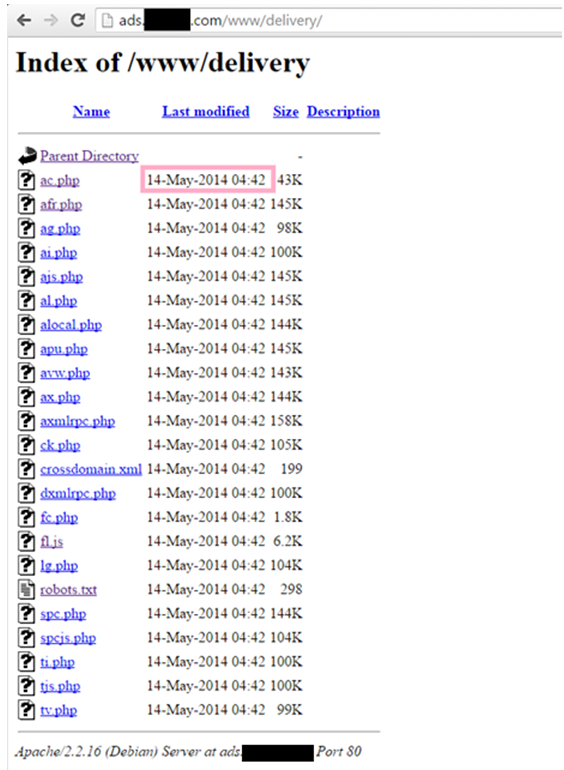 This infection process follows the same redirect method and landing page pattern as described above for the webhosting site.

This is an example of the code injected into the Ad iframe:

This type of injected code is consistent with the “EITest” TDS actor.

Check Point software blades provide protection against all stages of the infection chain:

In addition, SandBlast protects against such threats as part of its novel Threat Emulation technology. As you can see below, a recent sample uploaded to Virus Total was detected by only 5 out of 55 vendors. This is an extremely low rate, as this is not a new malware. Unlike traditional Anti Virus protection, SandBlast protects against malware variants that hasn’t been encountered previously.