Google published its annual security report yesterday for the Android ecosystem. The report includes many commendable efforts by Google to improve the security of users, and fight back against the raging surge of malware. One of the major actions Google has introduced this year was working alongside security vendors to eradicate malware from the ecosystem, a task Check Point was happy to contribute to. 70% of the malware Google cites in the report was discovered and brought to the public attention by Check Point’s mobile security researchers. This is a good indication of the major role played by Check Point’s researchers in protecting the entire mobile ecosystem, while identifying and alerting Google and Android users about these very real threats.

Google mentioned several malware variants discovered by Check Point inside and outside of Google Play, as leading examples of significant malware. The referenced malware includes Turkish Clicker, discovered by Check Point in January 2016 on the Google Play store, HummingBad which was first identified a month later and continued to rage throughout the year, DressCode originating in August 2016, and finally the infamous Gooligan malware, unraveled by Check Point in 2016. These four malware families represent the most innovative, sophisticated, and wide-spread  campaigns that infected more than 20 million Android devices during the past year.

In the section of the report that discusses vulnerabilities, Google highlighted the QuadRooter vulnerability set, discovered by Check Point researchers and first discussed at Black Hat in August 2016. The reason Check Point figures so prominently in the Google report is a direct result of the extensive investment made in assembling the best team of mobile security researchers and engineers. Informing Check Point’s mobile threat research are the 850 Mobile Threat Prevention installed customers and the 200,000 network gateways sharing analytics for malicious apps and mobile malware. In combination with cutting-edge technologies, Check Point was able to reveal more than 15 new mobile zero-day malware variants and vulnerabilities in the past year alone, more than any other security vendor. 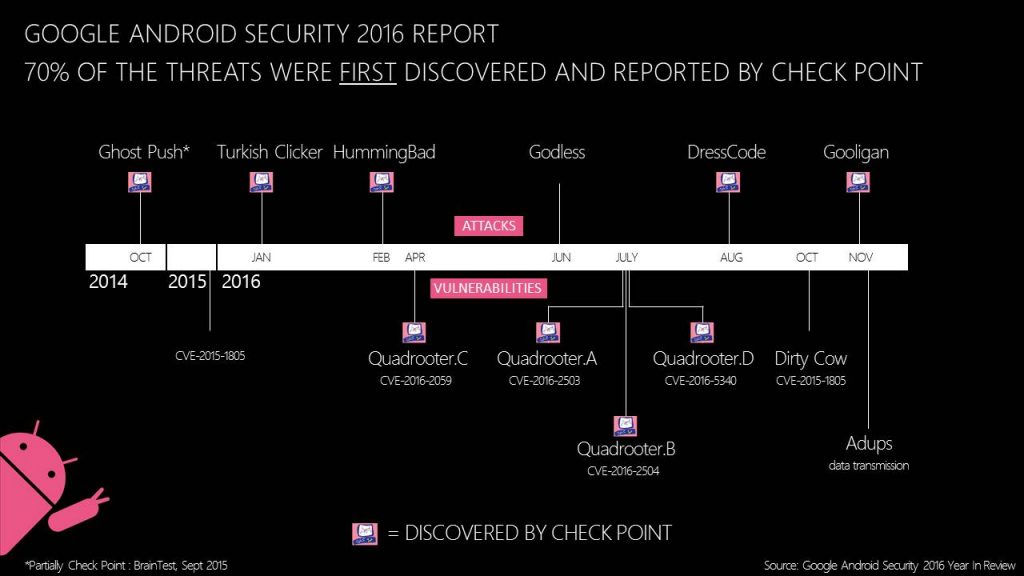 As threat actors continue to evolve and spread across the mobile landscape, only the best security solutions, backed by the best mobile threat research team, can protect your mobile workforce. Check Point’s Mobile Threat Prevention is the best solution on the market today, continuously providing the best catch rate, both in lab tests, and  in field. Check Point will continue to invest in the best security research in the future and lead the industry in the fight against mobile malware.