BROKERS IN THE SHADOWS: Analyzing vulnerabilities and attacks spawned by the leaked NSA hacking tools

Rarely does the release of an exploit have such a large impact across the world. With the recent leak of the NSA exploit methods, we saw the effects of powerful tools in the wrong hands. On April 14, 2017, a group known as the Shadow Brokers released a large portion of the stolen cyber weapons in a leak titled, “Lost in Translation.” This leak contained many exploits, some of which were already patched a month earlier in the Microsoft SMB critical security update (MS17-010). However, many users were unable to update their systems. Even before WannaCry hit, more than 400,000 computers in approximately 150 countries were infected with one of the tools, called DoublePulsar. It is unknown if this wave of infections was carried out by a single or multiple attackers. What is known is that this paved the way for the delivery, in May 2017, of the ransomware attack known as WannaCry.

There has not been such a large scale exploit on a Server Message Block (SMB) since Conficker in 2008. Often turned on by default, SMB is a widely used system for transferring files. In our Brokers in the Shadows report, we will explore the SMB protocol and dive into the mechanisms through which these cyber tools were able to launch their attack. We will also detail many of the tools in the release such as SMBTouch, EternalBlue, and DoublePulsar, along with EternalRocks which wraps these tools into a singular exploit suite.

Finally, we will demonstrate how IPS protected our customers on day zero.

Windows Client systems use the Common Internet File System Protocol (CIFS) to request file and print services from server systems over a network.

The CIFS Protocol extends the Server Message Block (SMB) Protocol with additional security, file, and disk management support. These extensions introduce new flags, extended requests and responses, and new information levels. All of these extensions follow a request/response pattern in which the client initiates all of the requests. The exception to this pattern is oplock break.

There are three SMB protocol versions, all of which are run over TCP ports 139 and 445. On a given connection, the SMB version used is decided in the following manner:

Each SMB message is preceded by a NetBIOS Session Service information block with the following structure:

The message consists of three parts:

An SMB message header is 32 bytes in length, and has the following structure: 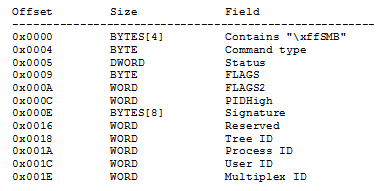 The Command Type field has a one-byte value (such as 0x32) that specifies the SMB command carried within this SMB message.

Recently, a new exploit suite was discovered dubbed EternalRocks. This suite gains control over the infected host in order to launch future attacks. EternalRocks uses the SMB exploits published by The Shadow Brokers in order to spread the infection. In this analysis, we will go through the attack chain which can be divided into 3 stages:

In our analysis we will cover a single tool from each stage.

The SMBTouch Reconnaissance tool scans the targets before the attack is launched, and later attaches a detailed report on the target.

SMBTouch initiates a session which forces the infected server to disclose OS information. Upon finding a vulnerable OS, SMBTouch proceeds to check the permissions it is granted by the OS. SMBTouch then reports what vulnerabilities are present in the system. This is a familiar procedure in accordance with how exploit kits detect web-browser plugins to analyze vulnerabilities. The information provided by SMBTouch is used to serve a suitable exploit.

There is a buffer overflow caused by a memmove operation, which leads to a mathematical error, where a DWORD is being cast to a WORD.

The vulnerability exists at SMB_COM_TRANSACTION2_SECONDARY (0x33) request using the malformed fields: Parameters Offset, Data Count and Parameter count. These allow the exploit to inject the DoublePulsar backdoor into the target machine.

As detailed in the Common Internet File System (CIFS) Protocol specification [MS-CIFS], the aforementioned parameters must meet the following conditions:

However, depending on the setting, the malformed values injection can take place, as we can see below: 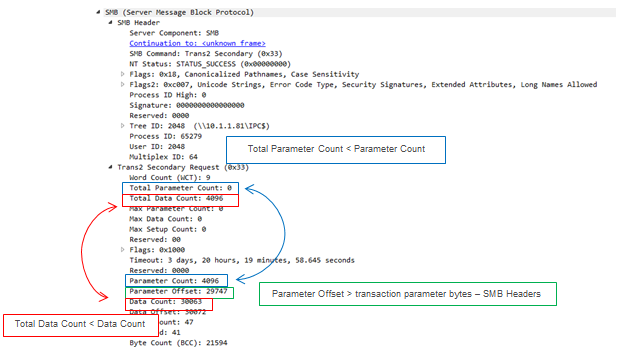 Using the above, DoublePulsar backdoor is delivered to the target machine encoded in base64: 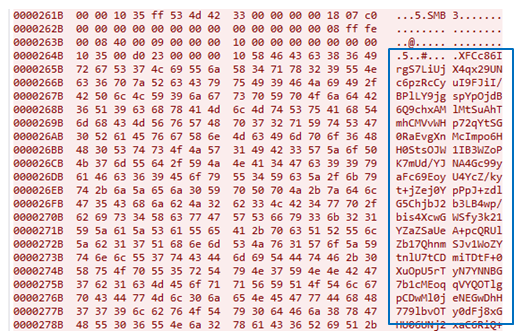 Once installed, the backdoor provides a basic communication interface based on the SMB_COM_TRANSACTION2 (0x32) command using the TRANS2_SESSION_SETUP (0x000E) subcommand.

The messages are sent over the Timeout and Multiplex ID fields.

The timeout field is used to deliver the command itself while the Multiplex ID is used to get a positive or negative answer from the backdoor for the requested command.

This leads us to the 3 basic commands (after the decoding by the expression above):

Here we demonstrate the execution of arbitrary shellcode using the 0xc8 command. 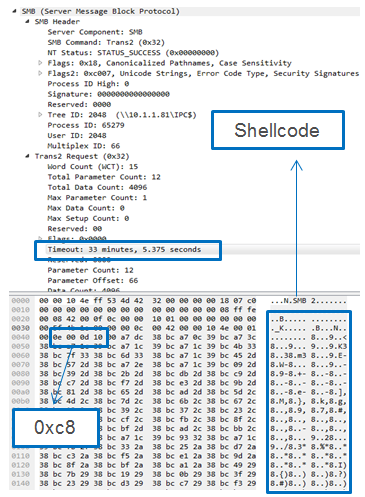 Following that, there is the removal of the backdoor from the target machine using 0x77 command. 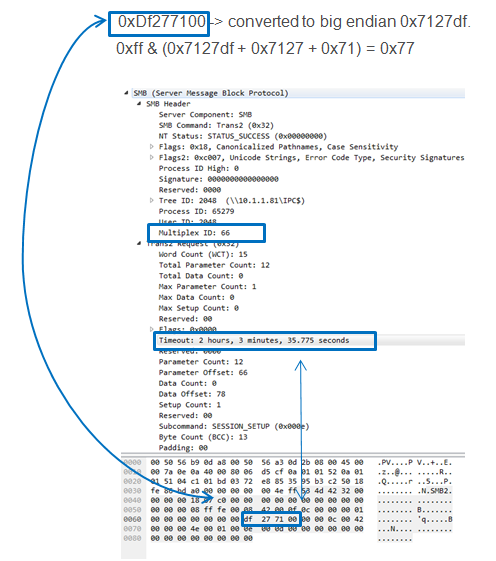 Finally, we make sure that the backdoor is no longer installed on the target using 0x23 command. 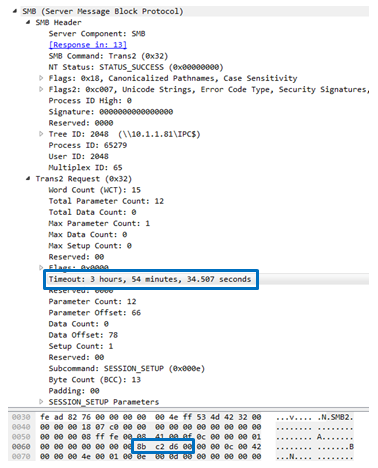 The backdoor returns negative response (0x41/ 65) showing that our machine is clean and all evidence of an infection is removed. 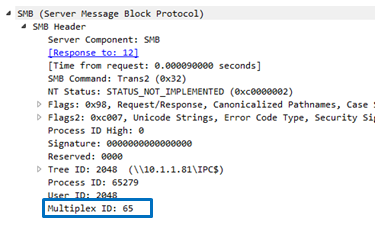 Check Point IPS Coverage
While many only became aware of the cyber-attacks when WannaCry started infecting computers in May, from the graph below we can see Check Point IPS detecting traffic long before. This coincides with worldwide studies showing the number of machines infected with DoublePulsar. As seen in the graph below, the first large wave of attacks began on April 21st. This was most likely an attack installing the DoublePulsar backdoor onto the victims. 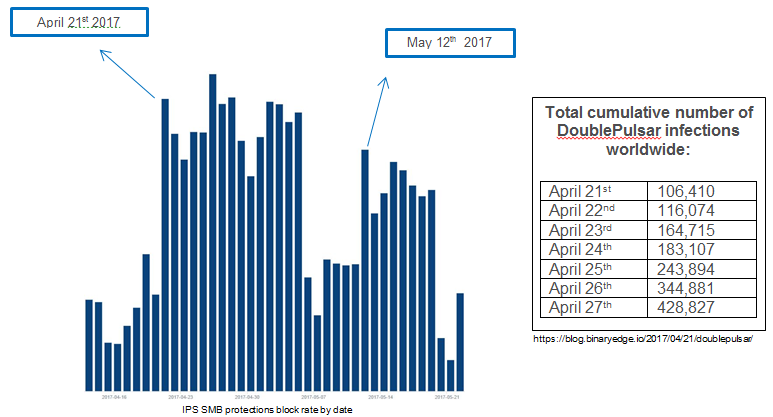 The second peak seen on May 12th, was the beginning of the WannaCry attack which was delivered on top of many of the machines infected with DoublePulsar. We can see from the graph above the large number of logs generated by IPS protecting against this attack traffic.

The timeline below shows the protections and attack events from the world (top bar) and IPS responses (lower bar).

The table below outlines the SMB protections released by IPS that are relevant to the Shadow Brokers release along with the WannaCry and EternalRocks infections.