eBay, the online auction and e-commerce giant, has locations in over 30 countries and serves more than 150 million active users worldwide. As a successful company with a massive customer base, it’s no surprise that the corporation has been the target of many cyberattacks.

An attacker could target eBay users by sending them a legitimate page that contains malicious code. Customers can be tricked into opening the page, and the code will then be executed by the user’s browser or mobile app, leading to multiple ominous scenarios that range from phishing to binary download.

After the flaw was discovered, Check Point disclosed details of the vulnerability to eBay on Dec 15, 2015. However, on January 16, 2016, eBay stated that they have no plans to fix the vulnerability. The exploit Demo is still live.

To exploit this vulnerability, all an attacker needs to do is create an online eBay store. In his store details, he posts a maliciously crafted item description. eBay prevents users from including scripts or iFrames by filtering out those HTML tags. However, by using JSF**k, the attacker is able to create a code that will load an additional JS code from his server. This allows the attacker to insert a remote controllable JavaScript that he can adjust to, for example, create multiple payloads for a different user agent.

eBay performs simple verification, but only strips alpha-numeric characters from inside the script tags. The JSF**k technique allows the attackers to get around this protection by using a very limited and reduced number of characters.

This is what you get if you include your remote website JavaScript:

This is how a simple JSF**k script looks:

This is how a successful exploitation of the vulnerability would look: 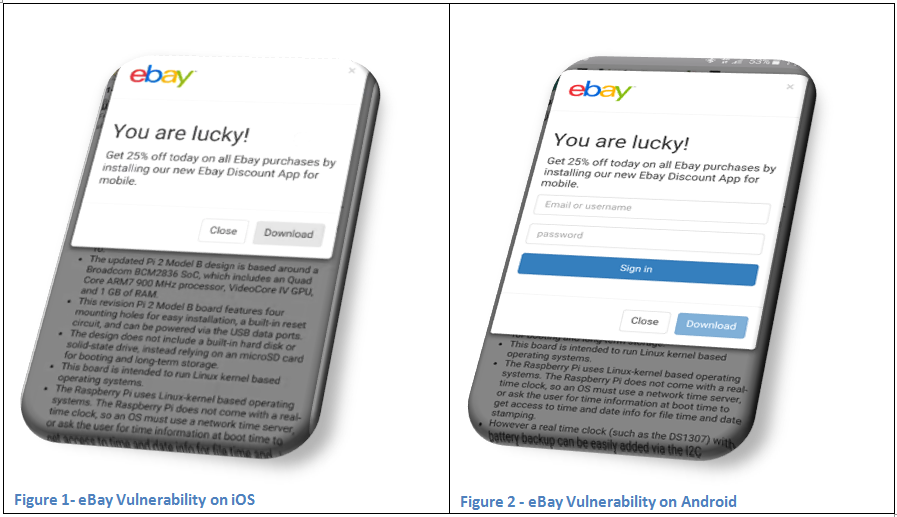 As shown, the message which appears on eBay’s website application (specifically, on the attacker’s store on the eBay site) entices the unsuspecting user into downloading a new eBay mobile application by offering a one-time discount.

For example, if a user taps the `download` button, he will unknowingly download a malicious application to his mobile device.

“The eBay attack flow provides cybercriminals with a very easy way to target users: sending a link to a very attractive product to execute the attack. The main threat is spreading malware and stealing private information. Another threat is that an attacker could have an alternate login option pop up via Gmail or Facebook and hijack the user’s account,” said Oded Vanunu, Security Research Group Manager at Check Point. “Check Point continues to be on the lookout for vulnerabilities in common software apps and Internet platforms. By disclosing threats as they are discovered today, we protect the future.”

Written by Martin Kleppe, this technique, which uses non-alphanumeric characters, allows the attacker to bypass IDSs, IPSs  and WAFs payload sanitation. Only 6 different characters are used: []()!+

The following basic vocabulary helps us write anything we need:

How the Logic Works

Let’s start by representing numbers using this technique. If you want to get 0, it’s written as +[]:

This works because we print the first value from an empty list, so it is zero.

According to our basic vocabulary, if you want to cast that to Boolean values “true” or “false”, we just add an exclamation point “!”:

To cast the Booleans to integers, all we do is to add +. If we want strings, we add +[], as in the following:

As you can see, the logic is very simple. If we want to combine them to get bigger numbers such as 123, we just write the number 1,2,3 as strings and translate it to an integer. We can write any integer we like with this technique.

To get characters, we write the same symbols and use the output as an array, as in the following:

Playing with our alphabet and these strings, we can get the following functions:

Exploring the DOM helps us get the rest of the characters, such as:

The following code represents the text alert(1) within JavaScript tags:

The result is normal JavaScript code with 6 non-alphabetic characters.

Our initial report was on December 15th, followed by a PoC (proof of concept) and a description of the vulnerability details.

Apparently, someone in eBay decided that this is not vulnerability, as they allow active content?

As we demonstrated to the eBay security team in the PoC, we were able to bypass their security policies and insert a malicious code to our seller page without any difficulty or restriction.

At this point, all we can do is hope that eBay will eventually decide to do something about this vulnerability.