Google bug 13678484, aka Android ‘Fake ID’, was just disclosed. What is this vulnerability all about?

In a nutshell, this vulnerability enables a threat actor to compromise specific applications or sensitive device data by falsifying its identity. As a result, a threat actor can either access app data, access private NFC payment data or obtain device management capabilities.

What would an attack exploiting this vulnerability look like? 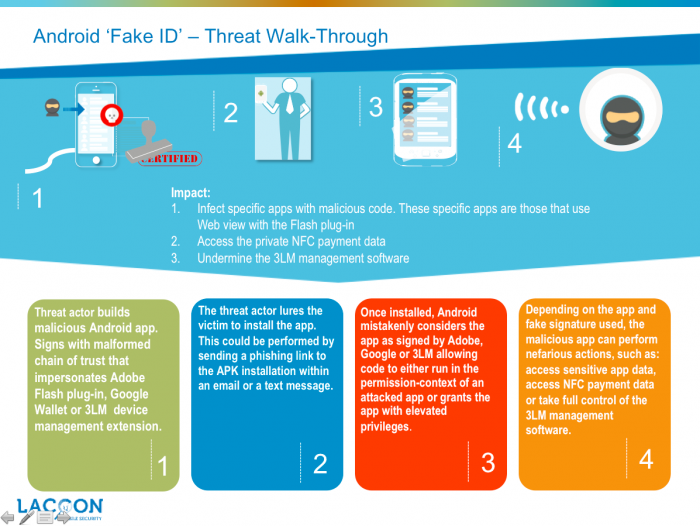 According to the researchers who found the mobile security vulnerability, all devices from Android 2.1 to Android 4.4 are affected.

By exploiting the Android ‘Fake ID’ vulnerability, a threat actor can perform any of these three nefarious activities:

The problem is that when Android builds the chain-of-trust, the verification process only compares the ‘subject’ rather than comparing the actual key with the one provided within the details of the certificate’s signer. As a result, an attacker can tinker with the chain-of-trust and claim to be signed by a party – without the party actually signing.

Due to this bug a wrong certificate chain is generated, and might include legitimate certificates, which are embedded in APK but weren’t been used to actually sign the application.

The Irony: the vulnerability that should not have been

The underlying Android app framework uses Java’s standard libraries, and as such it has also migrated Java’s chain-of-trust concept – along with its set of implementation vulnerabilities. Ironically, Android currently does not even require the usage of the chain-of-trust concept for its regular app verification process: during application installation or updates, the Android Package Manager compares the entire certificate chain structure as opposed to its content. The only place where the chain-of-trust is examined is for select apps which allow escape hatches out of the standard Android permission model. This is used as a quick-and-dirty solution by WebView’s plugin manager, NFC’s access control, and the 3LM management extensions.

Customers of Lacoon Mobile Security are secure against the threat of exploiting Android ‘Fake ID’ vulnerability.
By performing app analysis, Lacoon is able to identify apps containing a malformed chain-of-trust and alerts the security team.
Currently, Android incorrectly examines the chain-of-trust by comparing the subjects of the certificate and its issuer – and does not validate the cryptographic validity of the issuer and signer chain. Android needs to check also the keys to close this vulnerability (and this is what the Google Bug 13678484 fixes).

Although the following mitigation controls do not provide comprehensive coverage against the exploit of this vulnerability, we still recommend enterprises adopt these as to minimize the threat of exposure: