The infection was remediated after the system notified the devices owners and the system administrators. The infection vector was a drive-by download attack, and the Check Points Threat-Cloud indicates some adult content sites served the malicious payload.

Called HummingBad, this malware establishes a persistent rootkit with the objective to generate fraudulent ad revenue for its perpetrator, similar to the Brain Test app discovered by Check Point earlier this year. In addition, HummingBad installs fraudulent apps to increase the revenue stream for the fraudster.

Our analysis of the HummingBad malware shows that multiple fraudster groups continue to evolve their methods, including assuring the persistency of the malware once the infection is successful. This campaign is the latest in series initiated by various fraudster groups in the last 4 months.

This epidemic of Android malware includes BrainTest, PushGhost, and Xinyinhe. Moreover, as the malware installs a rootkit on the device, it enables the attacker to cause severe damage if he decides to change his objectives, including installing key-logger, capturing credentials and even bypassing encrypted email containers used by enterprises.

HummingBad starts a sophisticated chain attack that’s interesting in a few respects. First of all, the malware’s malicious components are all encrypted. This makes it much harder for security solutions to detect that it is malware since no malicious code is visible for inspection. Second, the malware initiates a silent attack vector. If this fails, the malware will initiate a second attack vector which has the same capabilities as the first one. This is an interesting course of action for mobile threats because redundancy helps the perpetrator ensure the objective is met. Finally, each attack vector consists of several stages, including decrypting and unpacking the actual malicious codes. 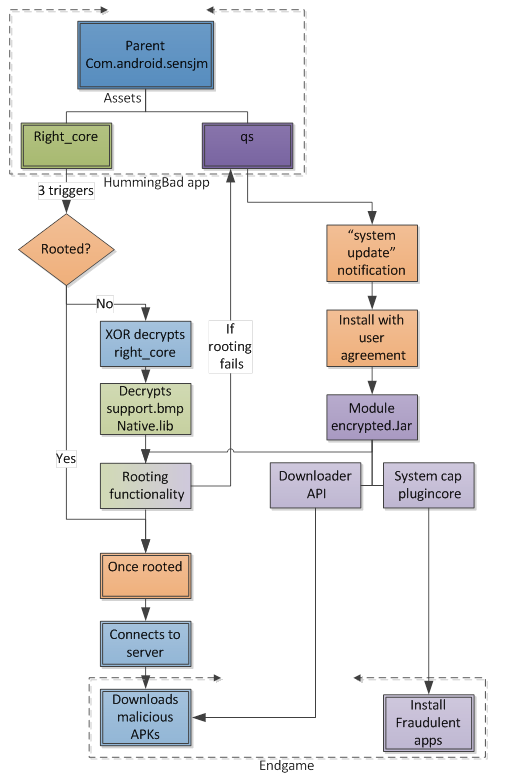 HummingBad contains within its assets two files, and each generates a separate attack. The first attack vector generates a silent operation triggered by one of three common events on the device:

Once elevated to root, the malware establishes communication with one of its C&C servers. From the server, the malware downloads a list of malicious APKs.

The second attack vector, called qs, is initiated only if the first vector failed to gain root. This attack vector uses social engineering in order to achieve its purpose. The component “qs” is also XOR encrypted and needs to be decrypted by the parent malware.

Once unpacked, the malware pops up a fake user notification regarding a system update. If the user opens the notification, he is required to authorize the installation of the “system update” which is actually a malicious APK. The malware then hides its own icon and DES decrypts a file called module_encrypted.jar. The module_encrypted.jar component has the same capabilities as right_core, in addition to several new exploits.

At this stage, the malware will try to connect to its C&C servers for further commands. The server can initiate several actions by the malware: