SWIFT, the global financial messaging system, issued an alert message regarding new customer’s compromised environments by sophisticated adaptive attackers in an attempt to send fraudulent payment instructions. This resulted in February this year, when a successful attack of over $1 billion transactions were made from Bangladesh’s central bank resulted in $81 million in unrecoverable losses. This added to several other SWIFT heists disclosed and suspected.

Some research suggests that these attacks connect them to previous high yielding actors such as the Carabanak banking fraud team and the Sony hackers. In such a persistent and targeted attack where the victim is well-selected for security weaknesses and high potential gains, the attackers spent a lot of effort examining the victim to penetrating their premises and keeping a stealth hold inside the bank. For a hacker, much importance was given to choosing the right time to act, so the attack passed as legitimate by the SWIFT system as well as advanced targeted malware used to cover the tracks of the transfer from the victim to avoid cancellation.

Once the fraud attempt was detected, a forensic investigation took place with professional consultants to connect the puzzle pieces to discover the penetration vector. These consultants also determined the level of damage within the system. This was done in an attempt to avoid future cases and making sure the attack was not still persistent. After sources quoted to say that the Bangladesh central bank had paid about $280k for 700 hours of work to the investigation team, it was reported that they turned down a proposal to extend such investigation with a unanimous decision made by the board.

Our malware researchers Ofer Caspi and Michael Kajiloti helped in creating a similar environment as the one compromised. In this “duplicated environment,” we installed SandBlast Agent.

We ran the malware reported to be used to cover up the fraudulent SWIFT transfers.

This resulted in the following five easy to understand reports showing the cover operation and the potential damage done:

In this case, there is a list of transaction tracks that were actually tampered by the intruder – together with the exact time where they were made.

The amounts inside the document were actually, making the attacker’s transactions look regular in the eyes of the local branch.

This will automatically narrow down our damage assessment to those transactions. 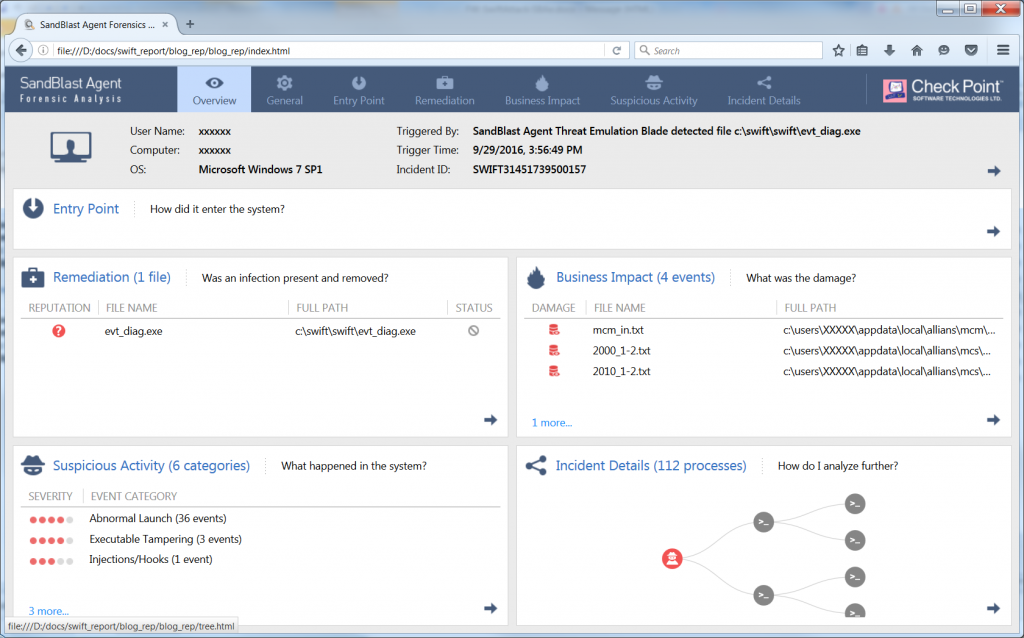 In a targeted attack such as this one, this knowledge can come either from a very long term recon effort or just from deep insider information that was provided to the attacker.

In the same way, we can see him injecting the SWIFT process below (Here named swift_pe.exe) to change this course of operation, knowing the exact binary form to inject.

Before our critical organization assets are attacked, we need to be prepared with a quick and automated damage assessment and a fast reaction to stop the attack spread. Then we should move to fight back by removing the attacker’s persistency in the system.

The cost of dealing with such an aftermath when caught by surprise is huge, and investigations don’t always lead to conclusions on the damage and infiltration vector.

This was a glimpse into an advanced targeted attack that wasn’t detected by anti-viruses.

We are seeing such sophisticated attacks rising in the banking industry, and we need to act now to be ready.