From Watching Alone to Platinum Sponsor – How AWS re:Invent Changed My Career

Sometime in May 2012, I got an email from AWS telling us they had decided to hold their first ever user conference: AWS re:Invent. Without hesitation, I emailed our Marketing VP: “We’ll be there!”

My company, Dome9 had just closed a $1.5M seed round the year before, and we were in the process of raising more funding.

In 2012 Dome9 consisted of only 7 team members working out of a cramped office in Tel Aviv. The cost to attend the show that year was $10,000 for a Bronze sponsorship and another $10,000 for travel, booth construction and some giveaways. “We can easily make it,” I thought. We reached out to AWS and immediately secured our spot.

The next four months went by and the funding situation didn’t improve. We realized needed to make some painful decisions to trim our spending and keep the business running. One of these cuts needed to be our attendance at re:Invent 2012. We would be staying in Tel Aviv and missing out on a very important day.

The initial email AWS sent out for the first re:Invent in 2012.

Instead of networking with my peers and meeting the pioneers that are taking advantage of this amazing transformation in IT,  I spent AWS re:Invent 2012 alone in our Tel Aviv office watching choppy live streams of Andy Jassy and kicking myself for what we were missing. It was hard as it felt so natural for Dome9 to be there. Like missing out on your own birthday party.

By the time the last presenter stepped off stage and the conference ended I knew two things to be true: one: the public cloud was going to be the future for enterprise computing, and two, we would never miss re:Invent again.

At the time we were primarily focused on security for hosted servers, and had only dipped our toes into the revolution of AWS. After re:Invent 2012 we decided to dive in wholeheartedly. From then on, Dome9 would be a security technology company for the public cloud. We shifted the focus of our network security solution from agent-based, to an agent-less versions that takes advantage of AWS’ powerful APIs.

And it paid off.

After we started to focus on providing best-in-class SecOps products for public cloud customers, the industry started to grow even faster than anyone expected. Before long, Dome9 was growing right alongside it. By the time re:Invent 2013 came along we had just enough capital to sign up for the bronze level package. 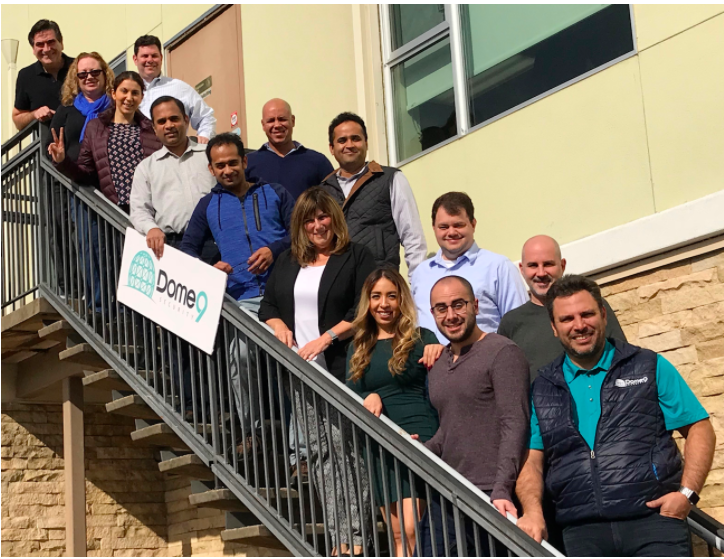 Between 2013 and 2017 our ragtag band of hackers has grown to over 75 team members working out of offices on two continents. We’ve gone from not being able to afford a $10,000 sponsorship at the very first re:Invent, to signing up in 2017 as a Platinum sponsor for the very first time.

Now that re:Invent is once again upon us I find myself reflecting back to that first failure to attend and all that has happened since. I wrote this post to celebrate where we’ve been and where we’re headed not just as one company, but as an entire industry.

I’m celebrating re:Invent skyrocketing from 5,000 attendees to over 60,000 in just five years. I’m celebrating our incredibly strong AWS partnership and the amazing value it adds to our 300+ enterprise customers. I’m celebrating the fact that the session: Automating Security and Compliance Testing of Infrastructure-as-Code for DevSecOps hosted by my co-founder and our CTO Roy Feintuch on Wednesday, was sold out in a few days (but don’t give up as they should allow additional walk-ins). And I’m celebrating our future: it has never been so bright and from visionaries on the outskirts, we now pave the way on the high road while still innovating at lightning speeds.

This year I won’t be watching re:Invent play out from a tiny office across the ocean. I will be enjoying it fully with my incredible Dome9 team surrounded by many of our current and future customers that all know now what I learned five years ago: the public cloud is winning the game.

See you in Las Vegas!