Check Point notified Google about the malware on May 5, 2016.

On all devices — rooted or not — Viking Horde creates a botnet that uses proxied IP addresses to disguise ad clicks, generating revenue for the attacker. A botnet is a group of devices controlled by hackers without the knowledge of their owners. The bots are used for various reasons based on the distributed computing capabilities of all the devices. The larger the botnet, the greater its capabilities.

Webinar: How to Keep Mobile Threats at Bay

Enabling and Securing iOS and Android in the Enterprise

Securing today’s powerful mobile devices and the data on them is critical for the enterprise, but more than half of decision makers in a recent IDC survey had security and compliance issues during mobility rollouts. Join guest presenter Rob Westervelt, research manager for security products at IDC and Michael Shaulov, head of mobility at Check Point to learn why it’s more important than ever to have security for iOS and Android that provides continuous mobile protection for apps, networks, and operating systems.

On rooted devices, Viking Horde delivers additional malware payloads that can execute any code remotely, potentially compromising the security of data on the device. It also takes advantage of root access privileges to make itself difficult or even impossible to remove manually. 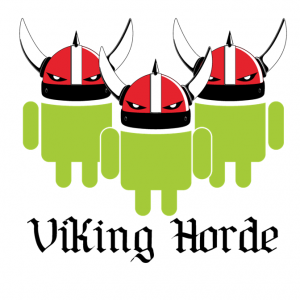 The most widely-downloaded instance of Viking Horde is the app Viking Jump, which was uploaded to Google Play on April 15 and has between 50,000-100,000 downloads. In some local markets, Viking Jump is a Google Play top free app. 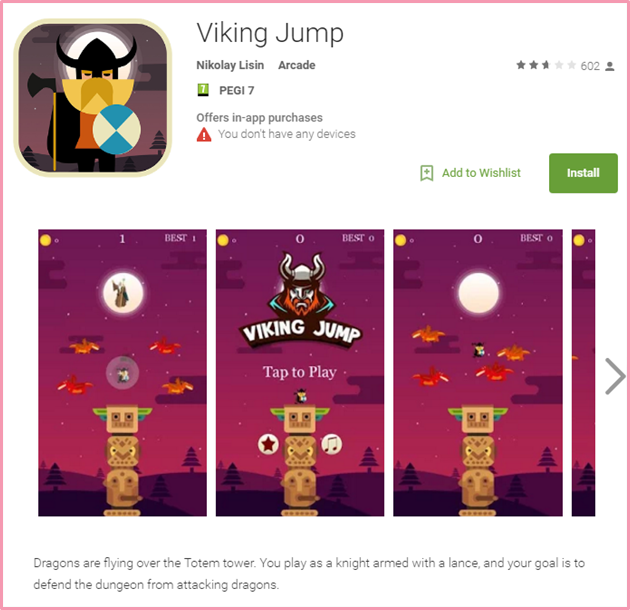 The oldest instance is Wi-Fi Plus, which was uploaded to Google Play on March 29. Other instances include the apps Memory Booster, Parrot Copter, and Simple 2048. All Viking Horde-infected apps have a relatively low reputation which the research team speculates may be because users have noticed the odd behavior, such as asking for root permissions. 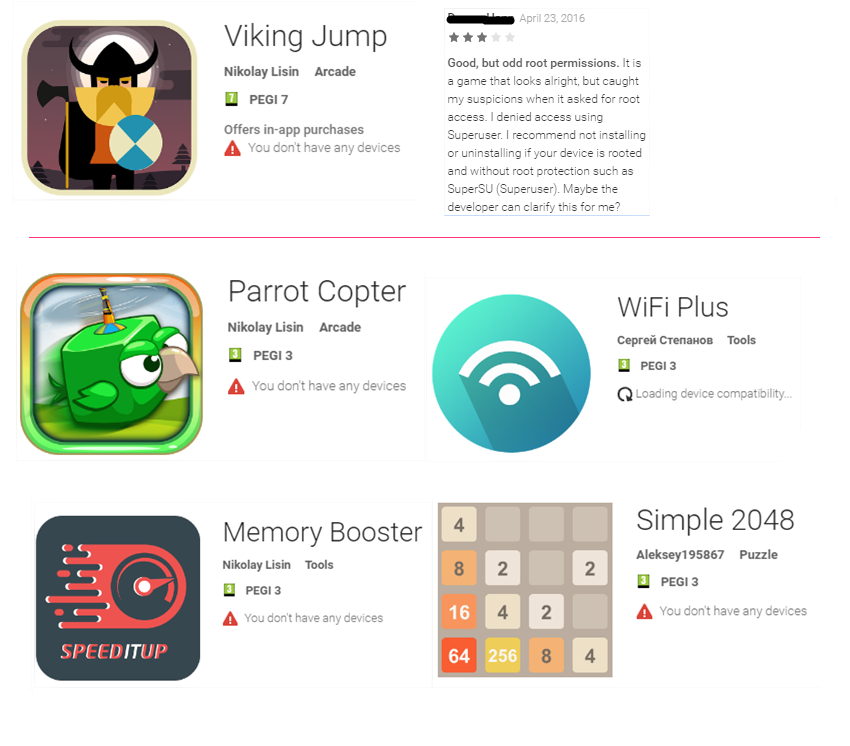 The botnet created by the attackers spread worldwide to users from various targeted countries. The Check Point research team collected data on the distribution of victims from one of the many Command & Control servers (C&C’s) used by attackers, which is illustrated below: 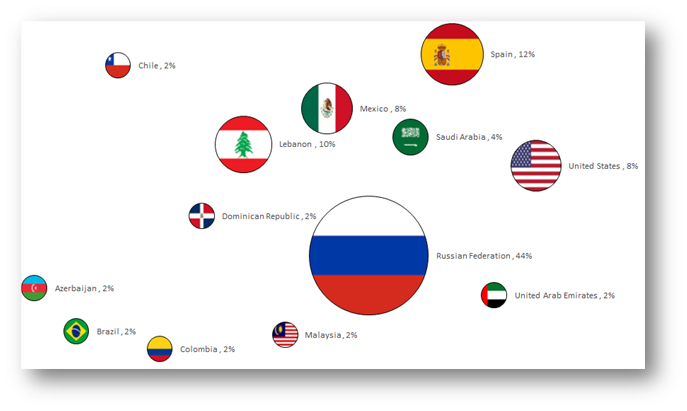 From its research of Viking Horde’s code and the C&C servers used in the attack, the research team can illustrate the malware process flow. 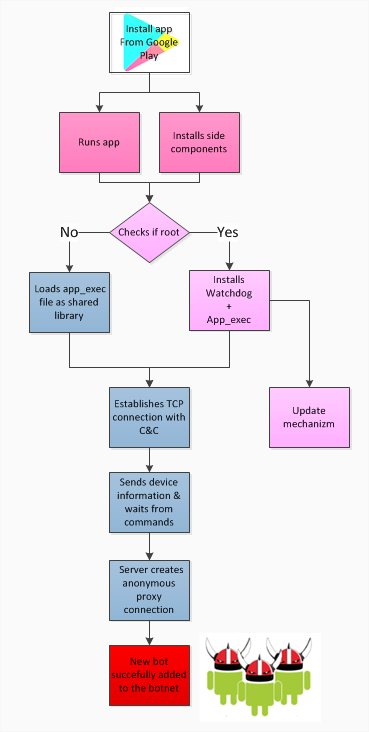 1. The malware is first installed from Google Play. While the app initiates the game, it installs several components, outside of the application’s directory. The components are randomly named with pseudo-system words from a preset list, such as core.bin, clib.so, android.bin and update.bin. They are installed on the SD card if the device is not rooted, and to root/data if it is. One of these files is used to exchange information between the malware’s components. A second file contains the list of the generated names of the components, to make them available to all components.

2. The malware then checks whether the device is rooted:

In both scenarios, once app_exec application is installed, it establishes a TCP connection with the C&C server and starts the communication. The communication consists of the following commands.

3. The next step is to accomplish the main malicious functionality by creating an anonymous proxy connection. The C&C sends a “create_proxy” command with two IP addresses and ports as parameters. These IP addresses are used to open two sockets one for a remote server (which is a client of the botnet exploiting the anonymous proxy) and the other for the remote target. Then it reads the data received from the first socket and channels it to the target host. Using this technique, the malware developer (or someone using this botnet as “malware as a service”) can hide his IP behind the infected device’s IP.

It is important to understand that even if the device is not rooted, Viking Horde turns the into a proxy capable of sending and receiving information per the attacker’s commands. Below is an example of an infected device as seen from an attacker’s C&C.

The remoteIP is the proxy’s IP, and the socksIP is the C&C server’s IP. The C&C contains some information about the device including its OS version, battery status, and GPS coordinates. In this case, the device is located in the US on T-Mobile. 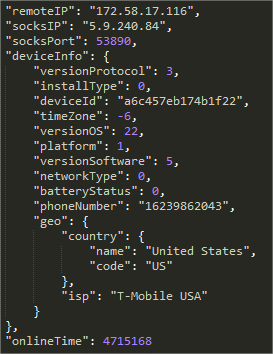 The botnet is controlled by many C&C servers, each managing a few hundred devices. The malware’s primary objective is to hijack a device and then use it to simulate clicks on advertisements in websites to accumulate profit. The malware needs this proxy to bypass ad-nets’ anti-fraud mechanisms by using distributed IPs.

Some user reviews of the app also claim it sends premium SMS messages, as seen in the screen capture below. This botnet could be used for various malicious purposes, such as DDoS attacks, spamming and delivering malware. 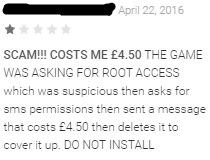 Vikings are a Persistent Horde

The malware uses several techniques to remain on the device. First, Viking Horde installs several components with system-related names, so that they are hard to locate and uninstall.
If the device is rooted, two more mechanisms are set in place:

Apparently, some users even noticed this activity: 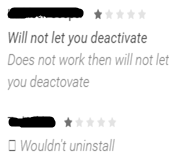 Perhaps the most dangerous functionality is the update mechanism. The update mechanism is split between app_exec and watchdog components. app_exec downloads the new binary from the server and stores it to /data directory with the app_exec_update name.

Watchdog periodically checks if an update file exists and replaces app_exec with this file. This means that upon the server’s command, Viking Horde downloads a new binary. The watchdog component will replace the application with it. This allows downloading and executing any remote code on the device.