A new vulnerability, codenamed TowelRoot, was recently released for the Linux kernel (CVE-2014-3153)  through version 3.14.5 and it has affected Android 4.4 mobile devices. This vulnerability is extremely prevalent and exists on almost every popular Android device in the market including the very popular Samsung Galaxy S5. 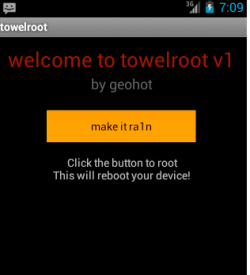 This security vulnerability, when exploited, can allow any app to escalate it’s privileges to root (administrator) privileges. This would allow an attacker to bypass the Android security model and:

The vulnerability is currently codenamed TowelRoot after a rooting tool that was released on mobile forums that uses the vulnerability to root most of the popular mobile devices on the market. This tool is being widely publicized and is easily available for use without the need for technical know-how.

Right now this vulnerability is only used by the rooting tool and has yet to show up in any malicious sample. Learning from the past, we can assume that it is only a matter of time until exploits for this vulnerability are distributed through other channels.

Mitigation Techniques:
The following mitigation controls will not provide 100% mobile security protection. However, following these best practices will largely minimize the threat of exposure.

The rooting tool currently effects a number of mobile devices, including but not limited to: